With Halloween over we are getting revved up for the holiday season, and we are super excited. It seems like all of the games that we have been waiting for have finally come out, or are right around the corner.

And I personally think that Thanksgiving is a great opportunity to open up some of these new releases and introduce your extended family to modern board games! Instead of pretending that you like watching football so you don’t have to talk about politics or help out in the kitchen, open up one of the following games!

“Thanksgiving Games” are any game that takes a maximum of 30 minutes to play and is something that you can play with anyone from 7 to 107.

This list is organized by level of strategy. It’s important to mention that I would not consider any of the below games “strategy” games. They may be more involved than “Apples to Apples” or “Cards Against Humanity”, but they are just as easy to learn.

Codenames won the Spiel des Jares (Game of the Year) in 2016 and has dominated countless top 5 lists ever since. It’s a simple word association game played with 2 teams. There is no maximum player count for this game which is why it’s a must for Thanksgiving. Each team has a team leader (Spy Master) that is trying to get you to guess at least 2 of the words or pictures that are on the table by saying one word. Once your team has the clue you all discuss what you think they want you to guess and then say your final answers. It’s a game that is all about team work and knowing how the Spy Master thinks, which is why it’s a great option for families. This is great for a Thanksgiving setup because it’s a “learn while you play” type of game and takes about 15 minutes to play. Quick, easy, and fun.

Rhino Hero Super Battle is the 2nd in the Rhino Hero series of games and one of the best dexterity games I have ever played. You are essentially building a house of cards and trying to get your super hero to the tallest floor. If your superhero was the highest when the house falls you win! It’s a super fast game that will have even the most skeptical family member sitting on the edge of their seat. 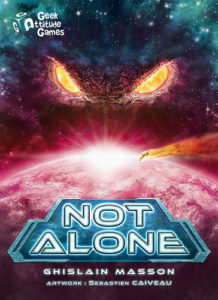 Not Alone is my favorite deduction game on the market. In this game one of you plays as an alien and the rest of you have crash landed on the alien’s planet. You are all going to a location by playing one of the 5 cards you start with. If the alien guesses which card you played then you don’t get to do that action. All cards that have been played stay face up so that the alien, through the process of elimination, can figure out what you’re going to play. Out think and out smart the alien to be successful! This game is another “learn while you play” game and because it’s also a semi-cooperative game it makes it super easy to teach anyone ages 8 and up. After you play it once your family members will want to try and be the alien almost immediately, and because of the quick play time you can play round after round. 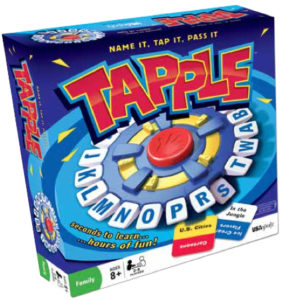 Tapple is the essence of a quick and fun game for all ages. Pick a category and start the timer. Each person takes a turn thinking of something in that category and clicking down the letter that that item starts with. So if the category was Kitchen you could push down the letter A for Apple, or S for Spoon, or B for Bread. If you can’t think of something by the time the timer goes off you are out of that round. Last person standing wins. The first time I played this game was during cocktail hour at a wedding. We played it for 20 minutes while standing and had a great time playing it as adults. Kids and grandparents can play this game at the same time and enjoy every moment. This is an excellent choice for any family gathering.

Dixit is my #1 Thanksgiving game since it was the first game to make me think of this category of gaming. It’s a storytelling game that takes about a half hour to play. It has the right amount of creativity mixed with the right of thought. The cards are all pictures/drawings. One player says a word or a phrase that best represents what is on their card, without being too specific. Then, everyone else has to find a card in their hand that represents what that word or phrase is. We shuffle all the cards and now everyone has to guess which card was the original one. If everyone guesses correctly (the clue wasn’t vague enough) the clue giver gets 0 points and everyone get points. If everyone guesses incorrectly (the clue was too vague) the clue giver also gets 0 points and everyone else still gets points. So as the clue giver you want to say something that is vague enough that the other players will find something in their hand that can relate to the clue, but something specific enough that will set your card apart to one or two of the players. And that is honestly more thought than you even need to use. Playing this game with family is perfect because you already know how they think. This game is rented so often around the holiday season at TLD that we have two demo copies floating around at our home base.