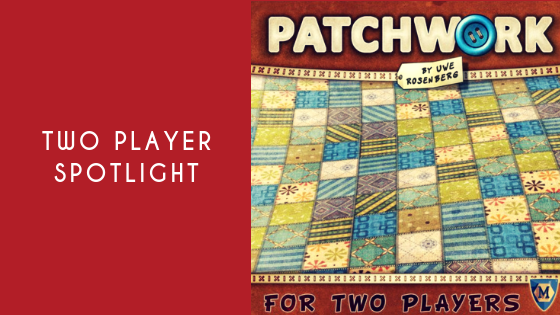 So just in case you don’t know me…I love two player games. Since I’m always hosting events I don’t actually get the opportunity to play games with large groups of people. Meaning that when I play games it’s usually just Kyle and I. Because of this I’ve always had my eye out for good games that you can play with just two people. And this one is one of my favorites!

“In Patchwork, two players compete to build the most aesthetic (and high-scoring) patchwork quilt on a personal 9×9 game board. To start play, lay out all of the patches at random in a circle and place a marker directly clockwise of the 2-1 patch. Each player takes five buttons — the currency/points in the game — and someone is chosen as the start player.

On a turn, a player either purchases one of the three patches standing clockwise of the spool or passes. To purchase a patch, you pay the cost in buttons shown on the patch, move the spool to that patch’s location in the circle, add the patch to your game board, then advance your time token on the time track a number of spaces equal to the time shown on the patch. You’re free to place the patch anywhere on your board that doesn’t overlap other patches, but you probably want to fit things together as tightly as possible. If your time token is behind or on top of the other player’s time token, then you take another turn; otherwise the opponent now goes. Instead of purchasing a patch, you can choose to pass; to do this, you move your time token to the space immediately in front of the opponent’s time token, then take one button from the bank for each space you moved.”

So what makes this game great?

First, it’s really easy to teach. Games with a spacial strategy, especially one that is visually similar to Tetris, are very easy for people to comprehend. You can easily learn it and play it for the first time within 45 minutes. And once you know what you’re doing, you can knock it out in a flat 20.

Second, the strategy has this hidden depth to it. This game has been designed so well that the economic and engine building mechanics just flow with the game, to the point that you don’t even realize that you’ve been sucked into a strategy game.

Third, you never know who is winning! Since most of your points come from what your quilt looks like at the end of the game you never know who is first and who is last. It always feels like it’s going to be a close game and I LOVE that the most about Patchwork. Since you don’t know who’s winning it makes for a more “fun” game experience as opposed to a “I’m going to win” feel.

Our game locator will show you where you can play this game, for free.

Check with your friendly local game store to purchase a copy for yourself.